Most of the time, when you go into into a room you’ve been in before, you have no issue finding your way around. Even if you have never been in the room before, it is not too difficult to orient yourself. The door is on one side of the room, windows on the other, with some furniture placed tastefully throughout. Once you come back into the room a second time, you immediately feel a sense of relative familiarity wash over you. How did you initially learn the layout of this room? Why was your internal map specific to other rooms, without falsely instilling a sense of familiarity in your new environment?

Jeffrey C. Magee became a Professor of Neuroscience at the Baylor College of Medicine and a Howard Hughes Medical Institute investigator in 2017, after a successful decade running a lab at their Janelia Research Campus in Virginia. His research aims to discover how individual neurons and their respective microcircuits process and store information. To achieve this, he uses a wide range of methods, including a variety of optical and electrical recordings and manipulations, in both the hippocampus and the cortex. 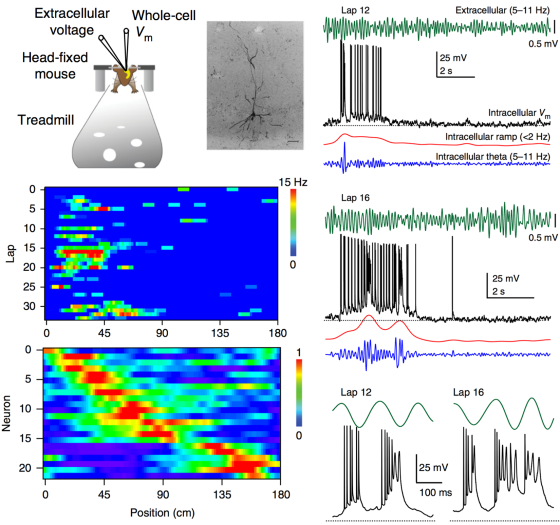 In 2015, Magee and his collaborators attempt to find how neurons in the CA1 field of the hippocampus compute information they receive from two distinct regions carrying their own distinct information in their paper “Conjunctive input processing drives feature selectivity in hippocampal CA1 neurons,” published in Nature Neuroscience. These two regions are the entorhinal cortex, which uses place cells to process location information, and the CA3 field of the hippocampus, which processes contextual information. While we do know CA1 neurons themselves associate context and location, creating maps of individual environments, we do not know how these neurons actually do it.

In these CA1 neurons, they identified a consistent series of repetitive electrical activity across multiple measures in dendrites at certain locations when a mouse ran laps on a treadmill, which they termed ‘plateaus.’ Interestingly, these plateaus occurred in a regular rhythm (known as ‘theta’) found in the hippocampus during learning and sleep. These rhythms were aligned with input from CA3, which reinforces the importance of CA3 in location-specific processing and in driving the activity of these neurons.

The logical question is: what do these plateaus do, exactly? When plateaus were seen spontaneously in silent neurons, these neurons then began to fire afterwards during each lap when at the location where the plateau occurred. It appeared that these plateaus were key to inducing new place fields for these CA1 neurons when creating new mental maps, combining contextual and location information, as expected.

To check whether these plateaus directly induced place fields, they repeatedly electrically stimulated CA1 in a plateau-like manner at the same location on the track. After these artificial plateaus, the stimulated cells did subsequently respond at the location where stimulation occurred, responding like they did when the plateaus were spontaneous. Interestingly, stimulation had to be similar to a plateau, or else the stimulated neurons would not subsequently respond, showing that plateaus set these fields, instead of activity in general.

In this experiment, Magee and his colleagues were able to show how we map specific locations mentally, matching location and context into a single computation. This occurs via CA3 neurons, which bear contextual information, preparing CA1 dendrites to receive location information from the entorhinal cortex, which creates a plateau of activity. This CA1 neuron will then fire at a specific location in that specific environment, linking the two together. This serves as a good example of how the brain biologically performs a required, fundamental computation many of us normally take for granted.

Posted by UCSDNeuro on April 29, 2018 in Neuroscience and tagged behavior, Consolidation, motion.