Dr. Mark Churchland is an Assistant Professor in the Department of Neuroscience and the co-director of the Grossman Center for the Statistic of Mind at Columbia University. The Churchland lab studies how movement is produced by neural activity. His groups examines, using a computational approach, how motor commands might be produced by recurrently connected networks with strong internal dynamics.

Typically, when we examine neural data, we plot the activity of neurons against time. This allows us to examine how individual cells respond in nuanced ways for a given context, but tells us little about how neural activity might fluctuate or how network level activity might be structured. Another way to look at the same data is to plot a trajectory that moves through a high dimensional space, where the number of dimensions corresponds to the number of neurons. For example, if you knew the activity of three neurons, you could plot a point in three dimensional space that represented their coactivation: the position of the point along the x-axis would represent the firing rate of neuron one, the position of the point along the y-axis would represent the position of neuron two, and so on. Points representing the activation of these three neurons can be plotted sequentially, producing a trajectory through the three dimensional space. This process can be generalized to numerous dimensions, allowing one to study the coactivation of populations of neurons, but rapidly becomes difficult to effectively visualize.

Reframing neural analyses though this lens, Dr. Churchland untangles novel population dynamics that support movement in his 2018 paper, “Motor Cortex Embeds Muscle-like Commands in an Untangled Population Response” (Russo et al.). In this paper, they trained two rhesus macaque monkeys to perform a cycling task where they had to cycle forwards or backwards through a virtual landscape to obtain a reward. During the trials, they took intramuscular EMG recordings and single neuron recordings in the cortex. They examined the population dynamics using PCA to identify the dominant signals in multi-dimensional data. Plotting the top two principal components yields a state-space trajectory, where each point on the trajectory corresponds to the neural state at one moment. As we can see in Figure 1, the neural and muscle trajectories behaved differently, suggesting that the neural activity in the cortex is encoding more than direct muscle activity. 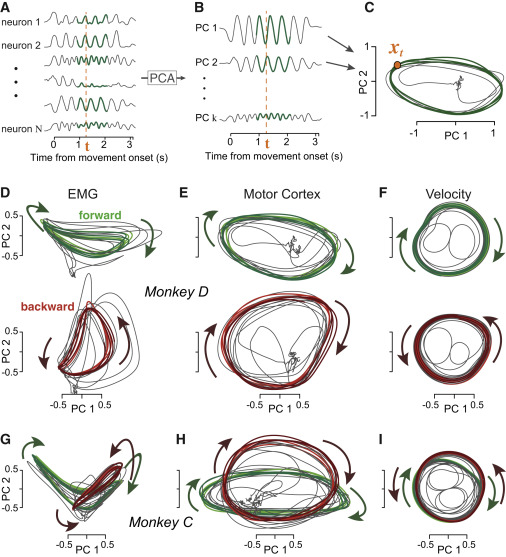 The populations of neural activity and muscle activity were compared by calculating their trajectory tangling (Figure 2). They found that muscle trajectories had higher levels of tangling than neural trajectories. This may be because muscle activity is driven by external commands rather than internal feedback dyanamics, and therefore the state of activity of a muscle at one point in time does not necessarily predict the future state.

To explore potential effects of low tangling, they trained a neural network to  to generate a simple idealized output with an additional parameter employed to reduce tangling (Figure 3). Networks with low tangling were more noise robust.

Finally, leveraging the hypothesis that muscle-like commands are embedded in additional structure that yields low tangling, they we were able to predict motor cortex activity from muscle activity.

To learn more about Dr. Churchland’s research and recent work, join us for his talk “Primate motor cortex exerts detailed control of muscle activity”  this Tuesday, 4/13/2021, at 4pm on Zoom.

Written by Blanca Martin-Burgos, a 1st year student in the Neuroscience PhD Program at UCSD.